I painted these two 10" x 30" canvases for a local art show called sight/unseen. Each participating artist had to create a piece that expressed some aspect of their identity. Click here for an interview about me on the Concord Community of Artists blog.

I looked through my grandparents' photos from the 1940s and found one of a Victorian flat in San Francisco where my mother lived as a child, and another of a ranch home in rural Northern California where my father spent his childhood.

Even though I grew up in suburbia, I've always felt connected to both the city and country influences from my parents' lives when they were young.

I wanted these country and city dwellings to be "twins" in style. Even though they are not in scale when compared to each other, I like that the city house is smaller and the country house is bigger - it's how they felt to me as a child, despite being the opposite of how they actually were physically.

I blended acrylic paints to get all the colors I liked, and I ruled everything with paint marker to keep things bold and simple. I also painted the papers that are glued inside the windows, those pieces were trimmed from larger prints I made using a gel plate. 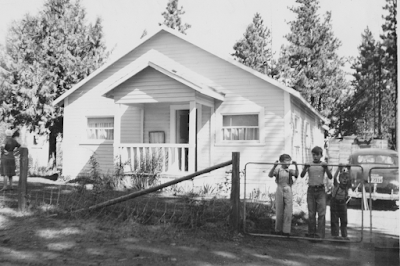 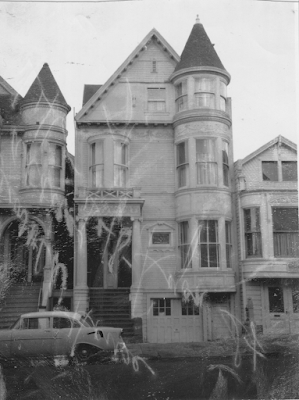 Each artist also wrote a narrative to describe their work and why it's meaningful - here's mine:

My mom and dad met each other in San Francisco in the late 1950s when they were both working at a movie theater - Dad was an usher and Mom was a candy girl. Mom had lived in the city since she was about five. Dad spent his childhood in a rural area of Northern California, then came to the city as a young teen.

My folks left the city for the suburbs after marrying because they wanted a calmer life for raising kids. We’d make regular weekend road trips up north to visit my dad’s family on their farm - twenty acres of dusty olive orchards with lots of chickens, cows, dogs and cats. I remember the creaking sound of the porch door, waking to the rooster each morning and helping my grammy with chores and crafts.

We took trips into the city to visit my mom’s family, too. The hustle and bustle of San Francisco frightened me as a small child; so many cars and people everywhere as we strolled through Union Square! But I remember admiring all the flowers in my grandma’s “secret garden,” tucked tightly between several big houses. I was also intrigued by the stairs everywhere and the long, narrow hallway of her Victorian flat.

I cherish everything about growing up in a suburban town, but I also really love the influences of my families’ lives in both the city and the country. After college, I gravitated to San Francisco, living there for many years. Now I’m back in suburbia…but I still have yearnings for quiet time on the farm, as well as party time in the city!