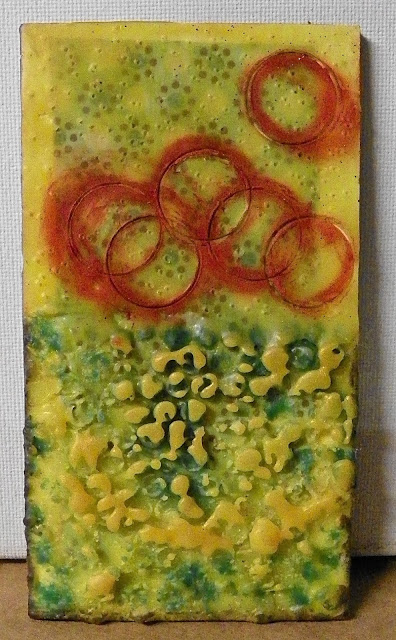 that's what i love about encaustic painting... it's an experiment every time.

it's so relaxing to paint and melt and carve and layer without really knowing exactly where you're going with it.

wax is pretty forgiving too. if you don't like it, use the heat gun to morph it into something else.

this is a small piece i created over the weekend. it reminds me of coral reefs under the sea at sunset.

there's a piece of dotted scrapbook paper underneath the first layer of yellow wax and i used pan pastels to add extra color.

i was trying to get a nice impression of little circles across the bottom using a strip of sequin waste as an embossing stencil, but it kept coming out wonky. so i decided to just embrace the wonk and continued to dry-brush the wax one layer at a time over the little tidbits until they were built up nice and high.